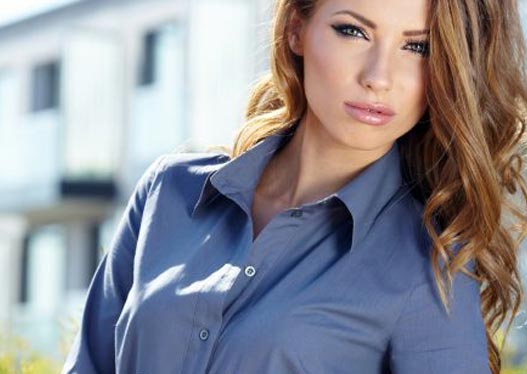 Also Known As, as in the case where a horizontal duplex could be also known as a semi-detached.

The Agreement of Purchase and Sale.

Apartment, an individual residential unit as part of a multi-unit structure.

Attached, as an attached garage.

Built-in, a term to indicate that a fixture or appliance is set into the structure itself.

Baseboard, as in baseboard heating units.

The Basement of a structure.

The Canada Mortgage and Housing Corporation, a Crown corporation which insures Canadian residential mortgage loans, protecting lenders against borrower defaults on mortgages where the down payment is less than 20% of the purchase price.

Carpet, but it can also refer to a Carport.

A Designation that the property has heritage value and relevant restrictions.

Days On Market, or the number of days since the listing was first entered into the MLS system or launched as an exclusive listing.

Electrical Lighting Fixtures which specifies strictly permanently attached lighting and does not include any plug in portable lamps.

Expired, to indicate a listing that is expired and no longer valid.

Forced Air Gas as relates to a furnace or an entire heating system.

Finished as in a basement or attic which has been completed for habitation with wall, ceiling and floor treatments.

For Rent By Owner

For Sale By Owner

Fixer Upper, or a property which requires significant renovations.

Garage Door Opener also known as a GdoR, which is a remote unit garage door opener.

Gas Burner & Equipment, a term to indicate a furnace of a heating system which functions on gas.

The Gross Debt Service Ratio is the percentage of the total gross income which represents the maximum funding that a mortgage borrower is permitted to pay yearly in P.I.T. If after analysis of the borrower financial standing the determination is made that they are allowed to contribute $350 out of their $1,000 of gross income it is thus referred to as a percentage: P.I.T. up to 35% of gross income.

High Efficiency as applied to various HVAC units for heating and cooling. Also known as Hi-Eff.

Heating Venting and Air Conditioning, which is a term generally applied to the entire climate control installation of a structure.

Inground as in a swimming pool, lap pool, or hot tub which is set into the grade of the land.

Included as in the case when a particular fixture which could be removed, is left in the property as part of the purchase price.

Irregular, indicating a lot shape which is not close to rectangular. Also referred to as Irreg.

Junior, as in the case of a junior bedroom which is usually only suitable for a single bed.

A Listing Agent of a real estate property, and also known as L.A.

Lockbox which is the secure container which real estate agents place the keys to a property, operable usually through a combination lock. Also referred to as Lbx.

Listing Broker Office, which is an abbreviation to indicate the main local office of the real estate company.

Luxury, usually applied in the sense of high end properties such as opulent condos and villa type residences.

Level or storey of a structure.

Master Bedroom, which is generally the largest bedroom in the structure and often benefits from an en-suite bathroom.

Microwave oven on the property.

Overlooks, as in a case where the living room overlooks the patio.

Owner Financing, or a form of creative financing such as a vendor take back mortgage which is extended directly by the seller.

Piece, as in the number of pieces which are in a bathroom.

Principal, Interest, and Property tax which is a common expression to indicate the total amount of basic costs a homeowner confronts. If it includes insurance, it is then expressed as PITI.

Private, as in a backyard that offers a degree of privacy.

Quality, to establish that the particular fixture or feature is of extraordinary quality above the usual standard for similar homes.

Recreation as in a recreation room. Also expressed as Rec Room or Rec Rm.

Rough-In as in the cases where the space for a future fireplace or dishwasher is set into the wall structures but the unit itself has not yet been installed.

Sides as in sides on a park, or ravine, or school.

Security, and can refer to a multitude of features including an onsite installed security alarm system that may or may not be monitored, or an existing contract with a private security firm, or in the cases of condominiums and commercial properties it can refer to 24 hour a day onsite guards.

Separate as in a separate living room and dining room, or a separate kitchen and breakfast area.

Skylights in the roof of a property.

Split Level or a structure which has stories which are offset at half height to each other.

Square Feet, and you may also encounter Sqm for square metre.

System, as in a security system or an air conditioning system.

To Be Announced or Arranged as the possession date is negotiable or not yet firmly established.

The Total Debt Service Ratio is the percentage of their gross income which constitutes the maximal amount that a borrower is allowed to pay in P.I.T. yearly on all of their debts combined.

Tender Loving Care, as in the case when a particular property has been neglected and requires some minor renovations.

Upgraded, usually applied in the sense of a particular fixture or feature being fitted to the property that is above the usual standard for similar homes, such as upgraded cabinets or carpets.

With as in the case when a property comes with all the standard appliances.

Window as in the case of window coverings.

Washer and dryer on the premises.

Walk-In as in the case of a large closet which is referred to as a Walk-In closet.

Where Laid, which indicates that there is wall to wall carpeting or broadloom existing only in specific parts of the structure.

Walk-Out as in a basement apartment which walks out to a level ground entry.

Extra or additional fixture or feature.

Year, and sometimes expressed as Yrly for yearly, or annual.

Zero Lot Line, which indicates a specific form of municipal zoning regulation allowing particular properties to place structures right up to the line separating it from the adjoining property.

By agreeing to Terms of Use, you will have ability to search up to 123466 listings and access to richer information than found on REALTOR.ca through my website.